The evolution of man. 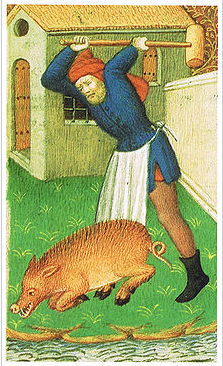 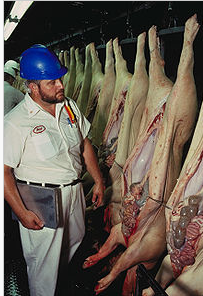 Well, at least he got the Mona Lisa right.
Posted by David at 8:39 PM

I was biking on San Vicente in Santa Monica and I saw a Jeep with a “Stop Cruelty Now. Support Prop 2” bumper sticker. Prop 2, of course, was on the California ballot two years ago. Official title: Prevention of Farm Animal Cruelty Act. It “prohibits the confining of certain farm animals in a manner that does not allow them to turn around freely, lie down, stand up, and fully extend their limbs.” Because getting your neck slit or having a stun bolt driven through your brain without first having the opportunity to extend your limbs and turn around freely is utter savagery.

Bill passed. Cruelty stopped. The farm animals who keep ending up on dinner menus across California might dispute that last part, but that’s raining on the parade, man. It passed. 63% of the vote. The progressive voters of Californaia did it. The egg and meat industries tried to fight but the compassion of the people prevailed. The chicken cordon bleu tasted more tender than ever election night 2008 as California progressives gathered to savor the victory. The vibe was so good it’s no wonder dude in the Jeep parked on San Vicente doesn’t want to let go. Keep the “Stop cruelty now. Vote prop 2” bumper sticker pasted on his bumper and maybe he’ll convince others out there to stop cruelty. Maybe a hot babe totally into social conscience and all that will see it and…

I go to the Santa Monica open market twice a week. I’ve signed petitions. I’ve brushed my hemp shopping bag against the hemp bags of California progressives. I’ve asked them about Prop 2. I said I thought the first step in “ending cruelty now” was to stop consuming animal products. The progressives told me where I erred. My first mistake was I took the word “now” far too literally. Now was a rallying cry. It’s symbolic. The fight against animal cruelty won’t be won overnight. Didn't I understand how much power the meat industry has? We've got to take baby steps. Prop 2 is a step in the right direction.

“It’s true,” I said, “you can’t eliminate the meat producers, but you, you personally, you could reduce demand for their products by one person if you stopped consuming animal products this very minute. Then you really would be stopping cruelty now.”

It was pretty uncool of me to call the progressives out like that. Like I was implying they weren’t part of the struggle for animal rights just because they eat meat. Like the fact that they enjoy a good juicy burger now and then somehow disqualifies them from caring about the well-being of the steer that provided the flesh for that burger. I’m such an asshole. I’ll be the first to admit it. Okay, I do my best to understand. The progressives want to stop cruelty now. They give the progressive version of the high-five when a small group of farm animals is given a few extra feet of cage space, effective 2015 (it takes that long to re-design cages, apparently). So why won’t these progressives stop consuming animal products? I’ll summarize, clarify, exaggerate, their most common reasons:

Sure, we could give up eating meat, but the thing about that is, I mean the last thing we as animal rights advocates want to project is a holier than thou image. If I went ahead and stopped eating animal flesh before the rest of the world was ready for it, I’d be like saying I’m better than you. That turns people off so fast. They’ll never hear our message.

Well, when I say stop cruelty now, I don’t mean now as is in this very minute. I was thinking more like, let’s see, I’m twenty seven now, say I live to be eighty, I’d say ninety but all this animal flesh I eat’s bound to be taking some years off, so, anyway, when I say stop cruelty now, I mean stop it in fifty three years, when I die, and I won't have to give up the taste i love.

Have you ever been to the restaurants on Montana? You’re like eliminating every option on the menu. 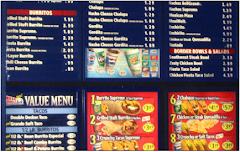 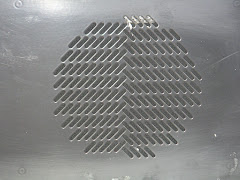